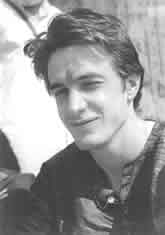 The life of Edwin Doubleday was short but full of vitality and purpose. From the age of six he had set his sights on becoming a doctor. He was a bright and imaginative child but not obviously academic: He applied himself to study with originality - seldom in the manner expected or prescribed. A successful student at the Anglo-European School, Ingatestone, he won a Todd scholarship to Fettes College in Edinburgh and became Head of School there. An outstanding distance runner, juggler, fire-eater and competent musician, he went on to St Andrews University where he obtained his Bachelor of Medical Science - He was famously busy. His clinical studies were at the University of Manchester and his Elective was productively spent in India at the Indore M.Y. Hospital. Shortly before his Finals he was killed in a freak accident on the London Underground system.

A bibliophile with a passion for architecture - He packed a lot into life and in the living of it he earned the respect of many. He seemed to demonstrate principle. He tested. He questioned. He teased at the loose ends of his interests and in doing so enriched the lives of those who knew him. His was an interesting intellect which carried debate forward. Though widely known for tom-foolery, he was a serious and engaged young man. This was recognised by Manchester University which, in an unprecedented gesture, conferred his Clinical and Surgical Degrees posthumously. His legacy has been intense and it would be folly to let a talent such as his simply to run, like sand, through our fingers. The means chosen to continue his interests has been the establishment of the Dr Edwin Doubleday Fund to promote the development of medical training. He was concerned with the subject. Characteristically, he worked for change as student representative on the Manchester University Medical Faculty Curriculum Development Committee. Edwin did not see doctoring as simple physical intervention and amelioration. His view was that the suffering which attends illness places us apart. It isolates us; and the most significant aspect of the practice of medicine is that it stretches out a hand to those in need. After all, as he often reminded people, we are all going to die: It is how we live which matters.

For those who were close to Edwin, it is important that the Fund continues its dedication to improving the quality of life and relationships, consistent with his positive philosophy.